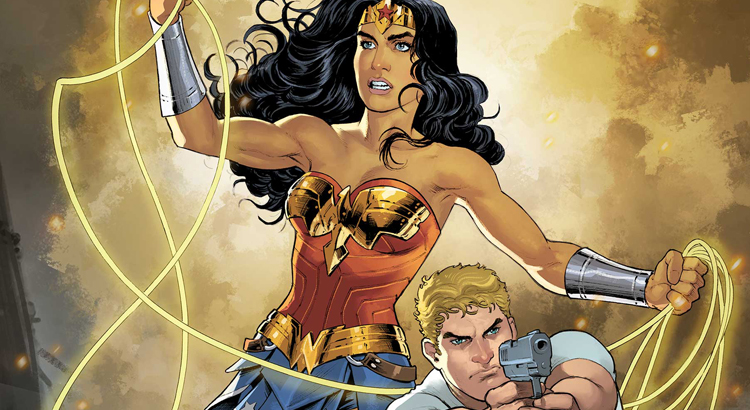 Wonder Woman 25 will be my last issue on the title, at least for the time being.

Before we get to rampant speculation, this is my decision. I just can’t maintain the pace on the title while also fulfilling my commitments to my other collaborators. It is, genuinely, as simple as that.

Writing Diana again has been an amazing experience, on the level of a dream-come-true. All any of us who’ve worked on the book this last year have wanted is to serve her well, to illuminate what we so absolutely believe makes Wonder Woman such a remarkable and unique and timeless and important character. To have had that opportunity is something that I doubted I would ever get again. Most of us don’t get a single bite at the apple, let alone two, you know? To get that opportunity at a time when Diana is rising to such (long-overdue) prominence makes that apple all the sweeter. That she’s turned 75 during the course of our run is–to ruin the analogy–icing on the cake.

We started Rebirth with a specific, though fairly broad, mandate from DC. “Bring her back to her core,” was what Geoff Johns told me. How we did it was up to us. Our success in doing so is measured, of course, by you. Wonder Woman 23 sees the end of our “primary” storyline, “The Lies/The Truth,” and Wonder Woman 24 serves as something of an epilogue to that tale. Wonder Woman 25 will, I hope, set a table for who is to follow, and provide for them as much room to work and explore and grow. Diana’s future is bright, that’s what I’m saying.

Comics don’t get made in a vaccuum. Everything that we’ve done this past year is the result of so many people, of so much effort on their parts. Good editors are hard to find anywhere, but Mark Doyle has assembeld an amazing team with Chris Conroy and Rebecca Taylor and David Wielgosz. They are unbelievably good at their jobs. We wouldn’t have managed one issue, let alone 26 (I’m counting the Rebirth issue, too!) without them.

Nicola Scott is probably one of my best friends in the world at this point. She is amazing. She’d be amazing if she wasn’t Wonder Woman anyway, but she’s kinda Wonder Woman anyway. It’s sort of not fair. A lot about Nic isn’t fair. Why does one person get to have that much talent AND be awesome, as well?

Bilquis Evely and I have never met in person. This is probably for the best, as I fear I will tackle-hug her and end up squeezing so tight as to potentially fracture ribs and/or frighten her. I will ask her about hair, and how she manages to make it look so consistently amazing. I will thank her for her deft touch, and her humor, and her patience, and her skill.

Matthew Clark is an old friend, and once upon a time, almost 20 years ago, he and I were going to work on Wonder Woman together. That we finally got to do so, albeit briefly, is enormous.

Jodi Wynne got thrown in the deep end on lettering, had to scramble for fonts that were “vaguely Persian crossed with Cyrillic” or “y’know, French-ish.” We will not talk about the deadlines she sprinted over and over again to meet–through no fault of her own–and how she stuck the landing every single time.

Romulo Fajardo Jr and Laura Martin blessed every page with their colors. Laura glowed. Rom shone. The scary stuff looked damn scary, the pretty stuff looked gorgeous, and the subtleties of their skill is so often overlooked, but it’s what brings a book fully to life.

But I have to save Liam Sharp for last, here, because he’s been the lion this year. He’s been constant, and driven, and every single time I started to flag or to doubt or to second-guess, he was the booster, he was the beacon. He is ferocious. He is probably the sweetest guy I’ve ever met in the industry (and I know Matthew Clark, as I’ve said, so that’s saying something), he is a dedicated, true professional. It’s his fault I’m in love with Barbara Ann Minerva, aka Cheetah. He is my brother. And he is the pillar that this run was built upon.

I’m optimistic that there’ll be more work with DC announced soon. In the meantime, Nicola and I are getting back to Black Magick, I’m working with an amazing raft of talent on the Lazarus +66 miniseries, Justin and I are getting ready to return to Portland in Stumptown, and–after far too long a hiatus–Lady Sabre will be returning in the next few months. I’m leaving things out. As I said at the start, there are commitments I need to keep. This is just a sample of them.

The last thank you, of course, has to go to all of you who’ve supported our run, and who I sincerely hope will stick with us through the end and into the next team’s stories. Wonder Woman fans are a breed apart. They are, in so many ways, like her. That makes stepping away all the more bittersweet, and it has made writing for her this past year–as I’ve said–a privilege.